It's that firework-y time of year again and I've been rummaging through all my gear (and roaming the aisles of Decathlon) in preparation.

November is generally cold and wet and the forecast for this year is no better, so layers and waterproofing are the key to survival. It's similar to dressing for winter sailing or hiking. To ensure that I don't leave any gaps for the wind to whistle through, there's an overlapping process that I employ...

I start with socks - normally knee high ski socks or similar. Over these go my thermal bottoms or regular leggings (leggings do the job well enough unless the weather is really awful). On the top goes my thermal top (invaluable!) and then over that (sporting a very attractive tucked-in look) go my trousers. These are usually jeans, but I have finally found a pair of Craighoppers that were made for ladies with long legs so I'm also experimenting with these.

At this point I throw in a non-essential layer: some sort of cheap t-shirt or old top. It has precisely one purpose - to make me look less stupid if I get super-warm and strip off the outer layers! (Genuinely nobody cares on a fireworks site, but I'm a girl underneath and it bothers me!)


The next layer is a fleece, followed by a jumper (usually my branded fireworks company hoodie). If the ground is very wet or it is raining then I also add waterproof trousers (with the fleece tucked in!!!). Next my body warmer, which does a superb job of keeping my core toasty warm, and then my big, yellow waterproof jacket. 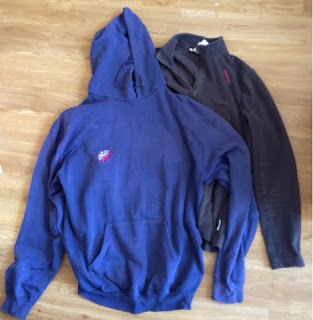 Up until now, my footwear of choice has always been my very sturdy hiking boots, but this season I'm experimenting with insulating snow boots - warmer, lighter-weight and more flexible. And a total bargin in Decathlon!

Gloves are another essential. I tend towards sailing gloves, preferring to just have the index finger and glove exposed. Wiring in can be fiddly work so full gloves simply won't do. However, I do carry ski gloves in my firing box for when I'm waiting around and getting cold.

I have a cosy fleecy buff to protect my neck and an assortment of warm hats. I often wear two hats.

Also there's knee pads which are surprisingly useful because as we as providing padding for kneeling, they insulate the knees very well!


Everything's organised. Just need to pack it all and hope for nice weather!
Posted by RainStorm at 17:27 4 comments:

Two months ago I signed up to a fantastic sounding new company: Kitchen Nomad. The concept is very cool - every month they send you a box packed full of ingredients and recipes all based on the cuisine of a particular country.

This month's box was based on Mexico, which was particularly great because I love Mexican food (it's definitely in my top ten of world foods). I often make Mexican-inspired food (e.g. fajitas or chilli) and frequently choose Mexican streetfood or restaurants when dining out. Fab.

So the box arrived, I got excited and headed straight out to buy the added ingredients that I needed for the taco recipe:

I was ready to roll!

First to make the dough for the tortilla:

This wasn't too tricky, just a bit time consuming to get the dough to come together and then kneed it.

The difficult bit was still to come...

"Dust the board and your rolling pin with a little flour. Press a ball of dough firmly on the board with two fingers to flatten it into a fat pancake, then roll out to about 2mm thick."

Oh. My. Life. I nearly cried. The dough stuck to the rolling pin. I tried adding more masa harina flour. The dough fell apart when I tried to pick it up, even when I rolled it thicker than the 2mm suggested. Nothing was working. I gave up on the rolling pin and just pushed the dough out with my fingers - better but still couldn't lift it off the work surface.

In the end, I found a recipe on the masa harina packet which said:

"Use a taco press or flatten betwee two pieces of plastic."

Hurrah! Something that worked. Two pieces of clingfilm, a mixture of fingers and rolling pin and finally I was creating flattish, roundish tortillas that I could actually pick up!

I took lots of photos of my attempts to get the dough rolled out, but it's quite a depressing sequence so I will spare you!

I cooked the tortillas and got started on the filling, which consisted mostly of onions, ancho chillies (which are an amazing ingredient - love these!), crème fraîche and chicken. The chicken was optional, but there wouldn't have been much to the filling if I hadn't used it. As it was I only had enough filling for less than half of the tacos that I slaved over! 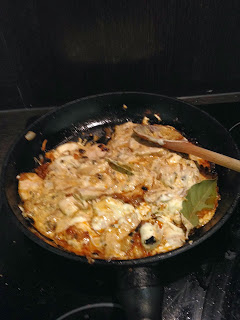 I have one particular niggle with Kitchen Nomad: I'm not convinced that they test out the recipes before sending them out. I have tried at least four now and all had an ingredient that wasn't mentioned on the actual steps (on this one it was the garlic for the filling. I guessed and added it five mins after the onions). On top of that, there were the portioning problems (not enough filling for the tortillas), and the fact that rolling out the dough the way the recipe says to is basically impossible.

In total, this recipe (which was rated 2/3 for difficulty) took me almost two and a half hours. I know I'm not exactly a chef, but I do cook regularly and felt quite deflated by this experience.

However, there are lots of pros to the Kitchen Nomad system:

Overall, I'm not ready to cancel my subscription yet, but I do hope the recipes come a bit more "tried and tested" in future so that the experience is more fun and less frustrating!

Am looking forward to trying the chilli honey crumble (doesn't it sound amazing?) and the baked feta (well, it is cheese after all!).
Posted by RainStorm at 21:13 2 comments:

It's all well and good blogging about fun things I've been up to, but I've been thinking a lot recently about how much more important people are than activities.

I feel so lucky to have some truly wonderful friends - people who I know would go to the ends of the earth for me, as I would for them.

It's these people who make surfing, paddle boarding, random day trips to France and meals out special. Great people who love a giggle and an adventure too.

They even make firework gigs worthwhile - why else would I choose to stand in a field on a cold, wet autumn day for hours on end?!

And it's also these people who we turn to in times of need: who share the sad and difficult times, reminding us that we are not alone.Wanting to help and choosing to listen. 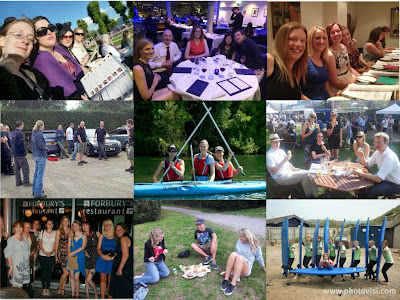 Therapy in the kitchen

It's no secret that I'm not great at relaxing, especially when life leaves me feeling stressed. I try all sorts to keep me calm and happy in times of stressy-ness. Examples include:

Recently, I've been surprising myself by choosing to cook on stressful days. I like cooking, and I positively love baking (although I'm one of those messy bakers who spends more than half the time trying and failing to clear up!). Still, normally these would be the "grab something out of the freezer"/"heat up some leftovers"/"order a takeaway" type evenings.

This week, chicken and mushroom pie: 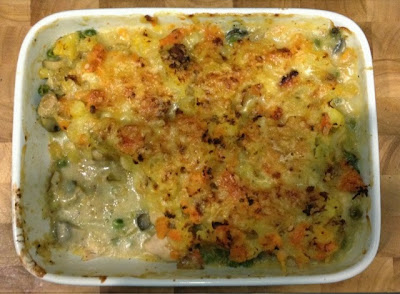 Last week, toad in the hole: 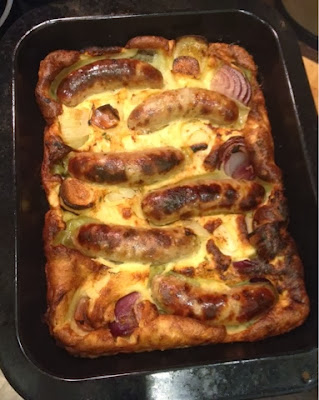 And I genuinely feel more relaxed afterwards, which bodes well for getting a good night's sleep and generally feeling less hassled by life! Hurrah for relaxing!
Posted by RainStorm at 09:46 1 comment:

The lovely Elle at Eat Run Sail has nominated me for the Sunshine Award:

This award is circulated to those bloggers to let them know that their posts brighten your day.

The Rules:
1.  Include award logo in a post or on your blog
2.  Link to the person who nominated you
3.  Answer 10 questions about yourself.
4.  Nominate 10 bloggers to receive the award. Link your nominees to the post and comment on their blogs letting them know they’ve been nominated.

Best childhood memory?
Carrying my massive teddy bear (named Henry) to my parent's bedroom to show them that I was as tall as Henry. I must have been about three years old. I'm pretty sure that it was very early in the morning and I'm not convinced my parents were too chuffed about being woken up!

Nicest time of year?
I change my mind on this all the time, but right now I wish it was late spring/early summer. I feel like I missed summer this year. Am already starting to make plans for next summer.

Favorite flower?
I don't know much about flowers although it's lovely to receive a bunch every now and again. I totally loved my wedding bouquet - I spent ages gazing at it over the days following the big event. 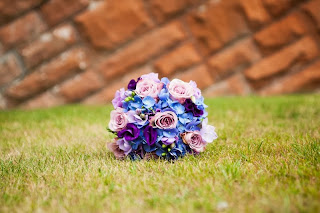 Scary food you would never ever even taste?
Insects! I also tried to eat a snail once but couldn't pysch myself up enough (I am a wimp!). One day I'll try snails properly.

What spice would describe you?
Erm... I'm not sure how to answer that one! I guess I'd go with cinammon because it smells lovely and is fabulous in baking, which I love to do.

Snooze button or jump out of bed?
Snooze! I am still loving my sleep app, which aims to wake me in my lightest sleep, but that doesn't mean I bounce out of bed with enthusiasm!

Morning drink?
Slice of lemon in hot water followed by a cup of tea.

Song that means something special to you?
I love music that I have heard live. One example would be the classic Chesney Hawks singing the one song he's famous for. We did fireworks for a wedding that he sang at and it all went swimmingly.


Secret crush?
I don't have one! How boring is that? I quite like Brad Pitt, but that's not exactly secret.


Well, I think with that series of questions I have firmly convinced you that I'm very dull! Oh well, onwards and upwards :)

Your turn:
What is your favourite book?
Where on the whole Earth are you happiest?
Posted by RainStorm at 19:19 1 comment: