Prepping for the "season"

Firework season is upon us! There are a few halloween shows over the next week and then the 5th of November looms large. It is going to be busy!

In preparation, I decided I better sort through my kit box and check that I have everything I need:
emergency chocolate - check
rigging gloves (formally sailing gloves) - check
warm toasty gloves - check
knife - check
nips (wire cutters)  - check
at least two warm hats  - check
cheap sunglasses - check
torch - check
headtorch - erm... better get searching for that... especially as it took three before I found one I liked... finally found!

And I may have treated myself to a trip to Decathlon for some extra warm clothing to help me through the cold (and possibly wet) days ahead. And the best thing was how cheap it all was :)
Bring on the fireworks :)
Posted by RainStorm at 17:36 4 comments:

In my imagination, I'm a dog owner. In fact, inside my own mind lives at least five dogs - they are all relatively large working dogs: Buzz (a dalmatian), Roary (a rhodesian ridgeback), Rocky (a rottweiler), etc...

Back in the real world, however, dog owning is a long way off. I work pretty long hours and am often away at weekends - my current life does not fit with dogs.

Whilst browsing the internet on a lazy day, I discovered that there is a dog rescue shelter very close to me, and they encourage volunteers to turn up and walk the dogs!  So today I did just that.

Seeing as it was my first visit, I was assigned one of their smaller, easier dogs. Meet Buffy the terrier: 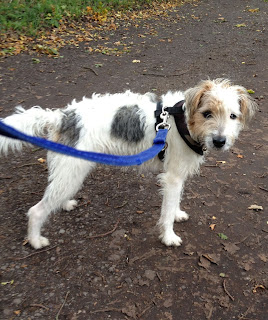 He was adorable! We mostly went walking along a bridle path (where we saw a field full of alpacas): 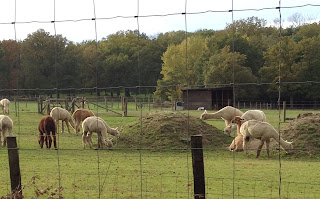 And we also met a few other dogs on our troubles who Buffy behaved really well with. The same could not be said for cars - whenever a car went past, he would try to jump into the road to chase it. It was a lesson in keeping him on a very short lead!

Fresh air and exercise for both of us, a great way to spend part of a lazy weekend :) 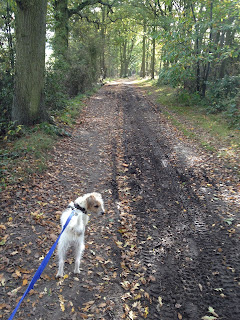 EDITED: I quite often have to edit grammar or spelling mistakes, but am quite embarrassed by this one - writing "bridal path" instead of "bridle path"! Oops...

After three and a bit weeks I finally have a working oven! I am so pleased - with all this colder more autumn-y weather I have been desperate to cook warming meals. Stews, casseroles, macaroni cheese, other pasta bakes, roast dinners,...

So this evening I am making the most of it by making toad in the hole. I had to make a special trip to the supermarket to buy sausages, but I don't care! 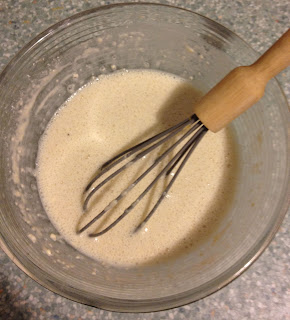 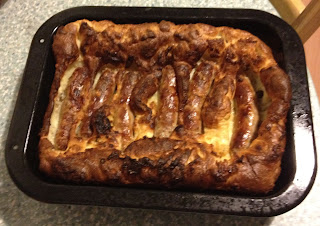 As a bonus qualification: it is a meal that is served with gravy - one of my favourite things ever! Yum...
Posted by RainStorm at 20:40 1 comment:

I'm rather pleased with a completely unexpected benefit of my new found love of ballet classes - rediscovering clothing that had been condemned to the very back of the wardrobe.

Does everyone have this collection? The items that you bought but then decided you didn't like; or used to wear lots until your got completely fed up of; or maybe that don't fit quite right. I seem to have quite a few.

The good news is, dance is giving them a new lease of life! Especially tops - I can wear them to warm up in, and sometimes even over my leotard as "dancer fashion". This vastly expands my small ballet wardrobe, almost letting me feel like a "real" dancer.

I bought this about a year ago as a work top, but only wore it a couple of times as it wasn't quite long enough and had a habit of riding up. That's not a problem when worn over a leotard or vest top.

Sometimes you have a day or a weekend that is wonderful. And for me, this weekend was just that.

My plans were very fluid - the only thing on the calendar was meeting up with some friends on Saturday evening, which is unusual. Some weekends I have as many as four (or sometimes even more) things planned.

Friday evening was very relaxed. I enjoyed a cupcake and played Zumba on the Wii (which I'm afraid I've only played a handful of times since I was given it last Christmas!), then developed a sudden craving for fish and chips. A short stroll to the chippie later and I was a happy bunny. And that was it - an early night and feeling of contentment.


Saturday involved an impromptu trip to IKEA, which is always fun in my books. However, even I have to confess to eventually developing IKEA-fatigue - a common affliction affecting most people after an hour or two. (I think some people start to be infected as they walk in the door!)

My plans for the evening were to visit some friends who have recently moved house, so after a late lunch I decided to bake them a cake as a housewarming gift. Flicking through the cake cookbook was very exciting - I couldn't decide what to cook because all of the recipes sounded fabulous. There's at least ten other cakes, muffins, cookies and tray bakes that I want to try at some point!

Having wasted plenty of time oogling the book, I then had to rush the cake baking! I decided on a lemon yoghurt cake, which came out pretty well (even if I did have to run off to shower and get ready whilst it was in the oven and then hurriedly ice it just before leaving).

What a fabulous evening! We explored the mansion-like house that they've bought and trundled out to find food, eventually choosing a mediteranean restaurant. We had such a giggle! The food was lovely, I managed to navigate the wine list and choose one that I liked (always a bonus) and it was just great to catch up with great people. We mustn't leave it so long...


A slightly late night led to a lazy Sunday morning - two hours of catching up on Strictly Come Dancing! By about noon, the weather was looking too lovely not to enjoy and a walk was in order. It was sunny and a tad chilly - the perfect autumnal combination. The leaves are just starting to turn and the world looked golden... 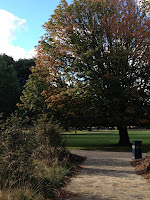 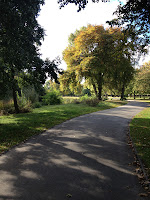 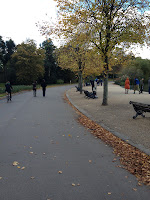 A late catch up

What's been going on in the world of RainStorm? Well...

I've been trying out some new ballet classes and have been managing to get to two a week since term began. This has also involved some serious flexibility work as my inability to lift my leg high or bend my back is starting to be a real issue.

The ripple-y blanket is trundling along nicely - it's a great way of keeping my hands busy whilst watching TV and really helps me to relax after a long work day. 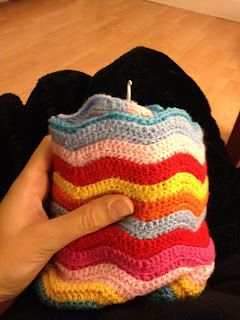 I have been enjoying cooking and baking. However these activities have suddenly found themselves unexpectedly curtailed as my oven has stopped working!

I even dragged myself out for a (very short) run one evening last week. That was a shock to the system!

Downton Abbey - over the summer, I watched the DVDs of seasons 1 and 2. I became totally hooked; and now series 3 is on and I am glued to it! Pure genius TV.

What has been keeping you busy?
Posted by RainStorm at 20:11 1 comment: