I decided months and months ago that my next big sporty thing would be stand up paddle boarding. It's been a while since I've tried anything new so I stuck it on my Summer Ambitions list. It just looks fun and is supposed to be really good for your arms and core muscles.

So last weekend, I went out with a whole bunch if friends to try it out. The guys at Engage Watersports were superbly accommodating and helpful.

We started with a spot of kayaking:

Then some of us moved on to the stand up boards:


I found the actual "standing up" bit quite hard, but once I was stood it was pretty straightforward.However, I wasn't great at steering - you really have to pull the paddle right across the front of the board to get it to turn. And I wasn't quick either!

Next we played with getting two people on the board. Despite my slightly dodgy balance, this went pretty smoothly too. I discovered it worked much better for me if I stood at the front :) 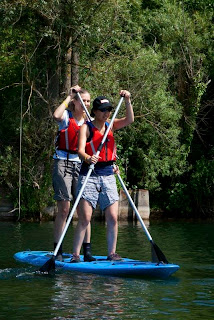 Then our instructors happened to mention that they'd never had three people on a board. Challenge accepted! 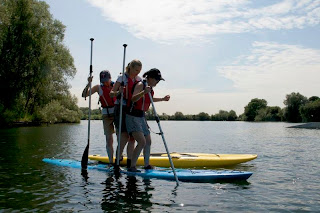 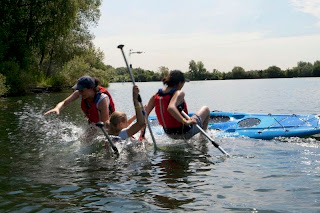 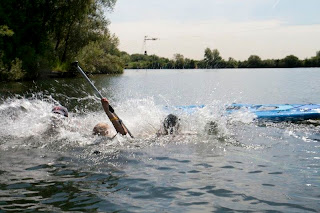 I think we lasted about 7 seconds the first time and only about three the second time (because I bailed!).

After about 90mins of playing, we reorganised ourselves into two-up kayaks for the trek down the river to the pub for lunch. It was 2.5 miles each way and rather knackering - I thought I did quite well but the next morning my left arm was seriously sore! In a deep heat, ibuprofen and keeping it still kind of way :S 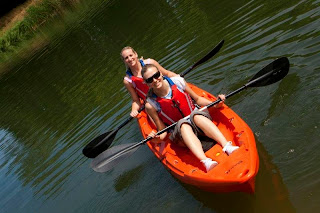 All in all a fabulous (if tiring) day out. I really want to get back on the stand up board sometime soon. Need to work on those arm muscles first!

All the photographs in this post are from ClareDowlingPhotography and are used with permission.
Posted by RainStorm at 16:57

That looks like so much fun. I would love to try it. The water is a bit rough for it near where I am ... on an ocean strait. A lake would be perfect I think.