The main reason for driving to Madrid whilst all sane Spaniards were heading to the coast was that Madrid has a zoo, and in that zoo they have four pandas! That's a lot of panda-y goodness. After my slightly disappointing encounter with the two at Edinburgh Zoo, we figured four pandas would definitely do the trick :) 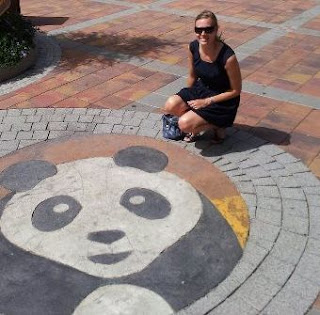 The Madrid system is much better - no special booking time, no queuing and a large viewing area. I think I spent nearly half an hour watching them (the first time, plus about ten more minutes when we returned at the end of our zoo trip).

Pandas really are pretty slow, lazy creatures most of the time. The adults have to spend a lot of time eating because bamboo has very limited nutritional value, and as a general rule they move about very slowly.

The adult male panda spent our visit eating. It was cool to see him manipulate the bamboo with all four paws and grip it with his almost-a-thumb pads. 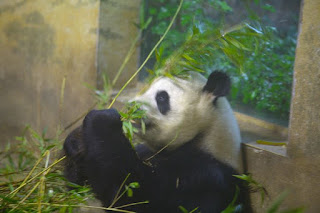 The female was also eating (read: lying completely covered in bamboo). But she did trundle off outside to play with her water bowl too. 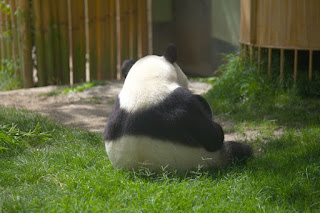 The youngsters were sleepy. One just wanted to lie down with his paw over his face and ignore the world. 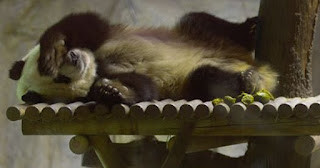 Unfortunately for him, his brother was half-heartedly leaning on top of him and rolling around. After a particularly comedic backwards roll where he got stick upside down, the slightly more active one levered himself onto a branch and gently slithered down to the ground, waiting for gravity to do the hard work so he didn't have to :) 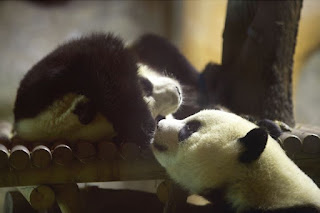 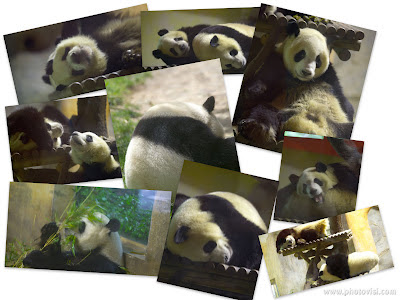 I think it's really difficult to take clear photos through glass, but A did a great job. He knew I'd want lots of pictures!
Posted by RainStorm at 17:51

So glad that this trip was a success.. and Spain, how could it not be wonderful!

You are soooo lucky to live where you do!

Definitely a success! A tells me I actually spent about an hour watching the pandas :) but I guess that proves that it was worth all the driving!

We do have relatively good access to most of Europe via plane or ferry. I mean to make the most of it whenever funds allow!