A trundle around the Olympics

It's sad that the world is such a scary place nowadays; I remember visiting the Barcelona Olympic stadium when they were still building it and being allowed inside. However, in London in 2012 you can barely get near any of the Olympic venues due to the worry of terrorist attacks.

We showed a couple of youngsters around London to see some of the Olympic "bits", starting with a trip down to Thames to see the Olympic Rings on Tower Bridge.


Then we travelled over the Thames on the new cable car, from the Edexcel Exhibition Centre to the O2 Arena (and back again). 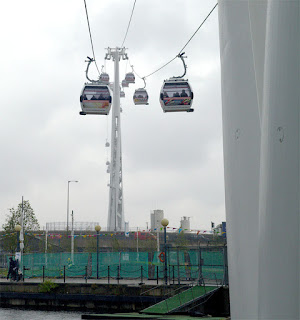 After a spot of lunch, we ventured to Stratford to get a view of the main Stadium. It's sad how cut off this area is - at least one nearby train station has been closed, as has the park that runs alongside it. The stadium itself even has a moat! (which is a bit cool at least)

In Stratford we also encountered the Olympic mascots, who the girls enjoyed posing with :)

To end a long day, we trundled up alongside Horse Guards Parade (where the volleyball will be) and through part of St James Park to Buckingham Palace, right by the finishing point of the marathon.

It was a long ol' day and we were all shattered afterwards :) I think I went on a total of 11 tube/DLR trains!
Posted by RainStorm at 22:18

How exciting to get to be around all of that where the Olympics will be.

Fun! I can't wait for the Olympics!!!

Fun! I love the Olympic mascots, so cute:) And the bridge is amazing!

Awesome! so happy for you that you took the time and made the effort to do all this. I love this kinda stuff.

Years ago while skiing in Innsbruck we had the opportunity to ski some former Olympic runs and it was such a neat feeling.

I have had the chance now to visit many former Olympic venues and I love doing it.

But to see it before hand and see the transformation taking place must have been very exciting! Thanks for sharing.