An evening of culture

Monday (yes, that was almost a week ago, but I haven't had a second to write about it yet!) saw me attempting an epic feat - leaving work on time and jumping on a train to get to Trafalgar Square. I'm pleased to say that I made it with a whole 10mins to spare!

And what was all this rushing for? The ballet of course :)

BP were sponsoring a Big Screen event across the country, involving a live link up with the Royal Opera House. On this occasion, the performance in question was the Royal Ballet's Titian 2012 - three pieces created by a team of different choreographers, composers and designers.

On arrival in the iconic square, we were presented with rain ponchos and blow-up cushions (which proved super-useful!) and then settled ourselves down. Each Act lasted about 35mins and the intervals were 30 mins which gave me time to grab some dinner between the dancing! They screened various "behind the scenes" films between each act, including live interviews with some of the people involved. 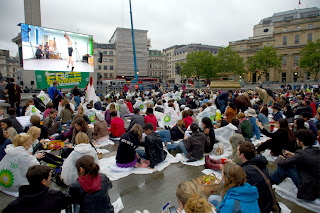 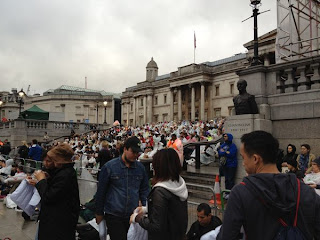 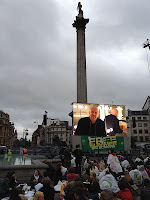 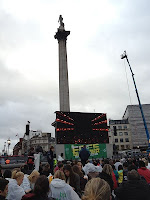 It was my first proper ballet and, if I'm honest, if I'd planned it better I probably would have preferred something a bit more traditional.

The first piece was particularly abstract (and included a giant robot arm which I personally found a bit random). I found myself admiring the strength and technique of the dancers rather than the choreography.

I enjoyed the second piece more although I didn't really have a clue what it was representing. The dancers were beautifully graceful and I was completely immersed in each pas de deux.

By the third act, I was pretty cold and uncomfortable (even on my inflatable cushion and wrapped in my fleece-lined sailing jacket!). However, this piece told a specific story and was much easier to watch. It was very enjoyable. Also, the costumes and set were bright and a little wacky which I enjoyed. I still didn't totally understand the story, but I could follow enough of it to really enjoy the dancing.

I'm afraid we charged off the moment it was over (partly due to the cold wind and partly because I wanted to get home the right side of midnight!).

Despite not understanding a lot of it, I thoroughly enjoyed watching ballet. Will definitely have to organise a proper theatre trip to see a performance sometime soon.

In the meantime, I mean to start reading some more complicated books and allegorical stories to help me follow better!
Posted by RainStorm at 21:05

How fun to see a ballet performance, or three, live in person! Yes, I agree that it is good to expose ourselves to new and challenging experiences.

That sounds so cool!!