Last week we watched The Adjustment Bureau. The DVD arrived from LoveFilm ages ago, but it never quite felt like the right time to sit down and watch a "serious" film. I had added it to my film list on the recommendation of a friend - he said it was a bit like Inception but that he'd enjoyed it more. He certainly didn't mention ballet...


I was blown away! It was a great film, but the dancing was particularly fantastic - I obviously recognised Emily Blunt as an actress (from The Devil Wears Prada!) and was amazed at her dancing. The filming was done in a way that the viewer knew she was dancing. There apparently was a body double for a couple of the trickiest moves, but she did almost everything.

The moment the film finished, I was online searching for more information about the Emily Blunt and her dancing. The first impressive fact is that she hadn't danced at all before taking this role. The director had planned to cast a dancer to play the part of Elise, a contemporary ballet dancer, but when Emily auditioned the production team realised that she was right for the part.

She trained for months with the Cedar Lake dance company before filming began. This article on Female First includes a fantastic short video about her training. 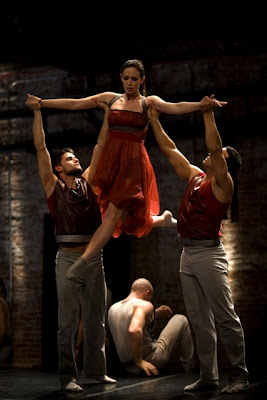 I am a teeny bit jealous of her natural ability and the training opportunities that she was given. :)

If you just rent one movie this year, my recommendation is The Adjustment Bureau!
Posted by RainStorm at 21:38