Things I didn't know when I bought my fluffy hat 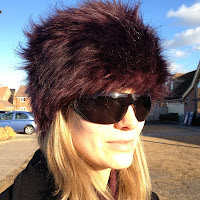 Honestly, when I found this hat and tried it on for a laugh I had no idea how useful it would be. I remember looking in the mirror and thinking "gosh, it doesn't look as bad as I expected". So, despite it being purple and fluffy and making me look even taller than my not-quite-six-foot stature, I trundled off to the cashier.

That we would have so many cold days and I would end up wearing it over and over again.

It would get commented on so often. Well, it is big and purple. But I guess that's partly because I didn't really expect to wear it very much!

That it's warmer than any other hat I own. On firework rigs I often sport two hats - a fleecy one with a knitted one on top. The purple fluffy hat is two-hats warm! (Although entirely inappropriate for rigging in - I will not be wearing it on site!)

Snowflakes land on it and stay for ages - it's a good look :) And we've had a surprising amount of snow this winter.

I hope that at some point spring will finally make an appearance, but right now it's the 6th April and I'm still wearing the hat!
Posted by RainStorm at 17:53

And it is very cute. Love the purple fluff! Suits you very nicely.