Sunday is stroll night for the London Friday Night Skaters (who also skate on Friday evenings, as the name might suggest). We met them in Hyde Park on one of the hottest October days ever (almost 30 deg C!), and joined the hoards on a skate around London.

It was a massive event: there must have been at least 150 people there! Most were on in-lines but a few quads like myself - the old skool club :) 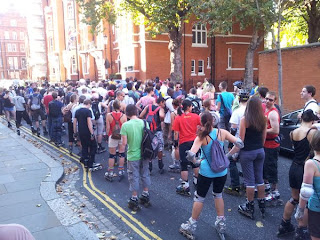 The event was very well organised with a large group of marshalls who skated ahead and closed roads for us. There were even some skaters with speakers on their backs to play loud music as we zoomed around the streets. In total, we covered 8.5 miles, which is quite a skate when you're used to doing a few laps of the park! Thankfully there was a pause in the middle (at Parson's Green), which was well planned with a Co-op round the corner for drinks and ice lollies.

And just after halfway I realised why I was so tired - my wheels are between 3 and 4 times wider than those on in-line skates, which means I was battling a whole load more friction! Especially on the more textured surfaces.


I finished the entire skate pretty exhausted, but rather proud that I'd kept up even given the friction difference. And I'll definitely be back for more. They say the Friday night events are hillier and faster, so I think I'll stick to the Sundays for my next few visits. Then hopefully I'll feel confident enough for to join an evening skate :)

You can find the route that I skated here and a whole load of pictures from the event on their facebook page.
Posted by RainStorm at 20:45