ParkRun and an accidental PB!

ParkRun is a growing phenomenon in the UK (and starting to spread across the world). The idea is that they organise free, weekly 5K runs that are free to enter and open to everyone. They're run by volunteers and are very cool.

This Saturday, I dragged myself out of bed (after a very long week) and along to Thames Valley Park, where the Reading ParkRun takes place. It was my second appearance (the first, rather embarrasingly, being back in January!) and I wasn't expecting too much from myself - the furthest I've run since restarting is 2.2 miles, so I was just hoping to get to the end of the 3ish miles in one piece. 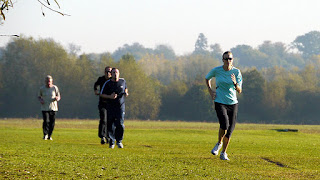 I set off too fast - being in a crowd of 200 people does that to you! But luckily, I spotted this quite quickly, using my garmin, and forced myself to slow down.

The Reading course is two loops, and I was very pleased to discover I had reached the half-way point at 16 mins. I also knew it was going pretty well at this stage because:
(a) I hadn't given up,
(b) there were a couple of other people running a similar pace to me,
(c) not very many people had overtaken me after the first 300m, and
(d) only 4 people lapped me.
I was feeling good, especially with my choice of ipod music: Best, the greatest hits of S Club 7 (good, old-fashioned late 90s teeny pop).

The sun was shining, I was running at a steady pace, and I just kept going. I really pushed myself for the last 500m or so, which nearly killed me, but it was worth it for the time: 33:04 officially :)

There you go, a completely accidental PB and a happy me. Good start to the weekend...

Well done you. I find the getting out of bed bit the toughest lol. And completely LMAO at SCLUB7 - you need to discover some more running music me thinks.