I had this past week off work. Traditionally this doesn't go particularly well for me: either I end up working/thinking about work for the whole time, or I plan to do loads and loads of useful stuff and then fail to get anything much done. Whichever way it goes, I tend to end the week still tired and stressed.

This week has gone better. I put this down to my new "to do list" strategy, which involves a short list for the day including nice stuff. For example, one day's list was:

It's been a revolution! I've got more done than usual and feel more relaxed!

The week started with four ballet classes (two on Tuesday and two on Wednesday). It was a fabulous feeling! I was originally planning a Thursday class as well, but my mind and body were both tired so I gave it a miss.

I also had a bit of a sewing frenzy; my poor black coat has been missing a button for ages (probably over a year). I finally headed to the department store and chose a new set of buttons (I couldn't match the other buttons). Once I got stitching, I didn't stop! 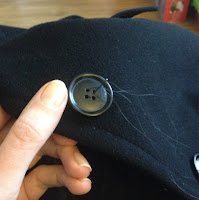 After those jobs, I picked up a project that I have been working on (occasionally) for years. At least ten years - crazy: 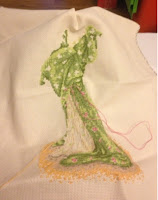 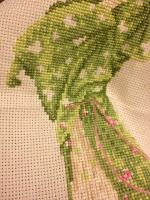 And as well as all that, I've also bought several cards and presents (April is a busy time of year!), had my hair cut for the first time in months and eaten some really yummy food...

I LOVE the bunny socks. My goodness, Girl, you do have the cutest gear.

And so glad you enjoyed 4 ballet classes too. You must have been very tired.